Nova Scotia’s mining and quarrying industry is seeking $19.5 million in government funding for an airborne geophysical survey program. The project, called Minerals Play Fairway, would improve our geological understanding of Nova Scotia, help find future mines and quarries, and be an essential tool for attracting investment and job creation to the province. 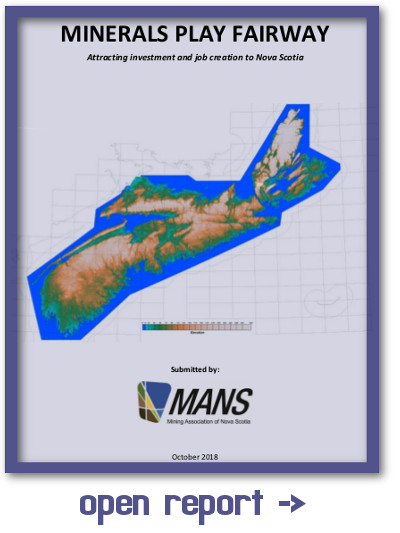 This needs assessment report is the first step toward building a minerals version of Play Fairway – a free, best-in-class database of geophysical knowledge that will help attract investment and job creation to Nova Scotia. The oil and gas Play Fairway was a made-in -Nova-Scotia success story and copying it for the mining industry would help the industry grow and create jobs for Nova Scotians. The needs assessment analyses the province’s publicly-held airborne geophysical data and recommends that government fund a series of geophysical surveys:

Nova Scotia’s mining and quarrying industry employs 5500 Nova Scotians, mainly in rural areas, and generates $420 million per year in economic activity. Fostering mineral exploration is essential to ensuring the industry’s ability to keep creating new jobs for Nova Scotians. If we do not do exploration today, there will not be new mines tomorrow.

Other Benefits of Geophysical Data

While Minerals Play Fairway’s main focus is to help find mineral deposits and attract investment to the province, there are several other ways in which Nova Scotians would benefit from the geophysical survey program detailed in this report:

Improving our geophysical knowledge of the province would lead to improved safety, economic opportunities and better land, water and environmental management.

The partnership between the mining industry and the Government of Nova Scotia has been very successful in recent years. Government policy decisions - including extending the fuel tax rebate to the industry, the Mineral Resources Act overhaul, and the establishment of the Mineral Resources Development Fund – have helped the industry grow and create jobs for Nova Scotians. We believe Minerals Play Fairway is an opportunity to continue to build on this success and the industry/government partnership that has already accomplished so much.